Resolution vs habit: I gave up on resolutions and focused instead on better habits – here’s how I did it.

It’s the beginning of March. For many people I talk to, the NY resolutions they set themselves at the beginning of January are a distant memory. When I head to the gym it’s a lot emptier than it was a few weeks ago – all of the ‘keen beans’ who packed the place out in week 1 of January are nowhere to be seen. I’ve certainly been in that position myself many times over.

Why is it so hard for us to stick to our resolutions? Well, let’s face it, building new habits is tough. Now more than ever we are surrounded by distractions and temptations.

For as long as I remember I fell into the same traps. I’d hit January hard. I’d have my fitness plan laid out or my writing plan clear or whatever it was that I wanted to get better at and then within a matter of weeks all of my best intentions had gone. In the past I’ve used habit apps, setting reminders to ping up on my phone – I ended up ignoring them after a few weeks. So, this year, I decided to change my approach and as its working, I thought I’d share it with others.

As you’ve probably gathered already I ditched the resolutions and decided to re-frame what I wanted to achieve as a range of lifestyle tweaks or changes. I wanted to focus on the few things that would add up to making the most difference when it came to leading a more balanced lifestyle. Also, rather than looking at a resolution over January, I decided to try to give myself more time to create better habits by looking at a 90-day time-frame. Believe it or not, thinking about these changes in a way that allowed for more time actually felt less pressurised than trying to achieve a change in just a month.

Once I had my plan I thought about how I could track how I was doing. I mentioned before that habit apps had previously not worked for me. Then I thought about how my wife and I had often used incentive charts with our young kids to show them how well they were doing towards certain things. So, I made my own chart with 90 days laid out so that I could tick off each day I felt I had achieved the balance I wanted.
Breaking things down to each day has really helped. In fact, to chunk it down further I’ve found it helpful to think about it as achieving ‘balance’ in the AM first and then the PM.

I mentioned I have young kids. They have been great at holding me accountable to my progress. They don’t totally understand what I’ve been doing but they know I get a tick if I’ve had a ‘balanced’ day and a cross if not. I told them that I was only allowed 6 crosses over 90 days and they seem to have rejoiced in the times when I got a cross, “ooooh, Daddy you’ve been naughty”, but it’s made it kinda fun to have it up there for the family to see in the kitchen. 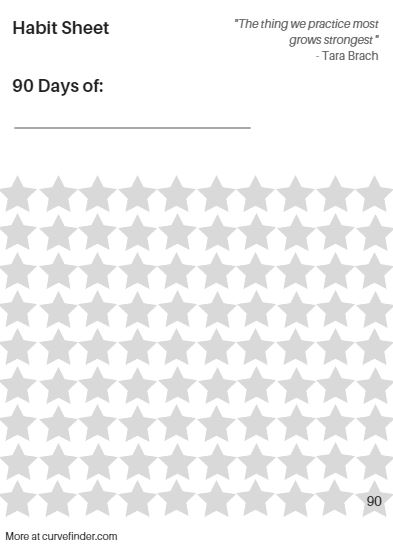 This is my Habit Sheet

Cut yourself some slack

It’s important that what you set out to achieve is stretching. If it’s not then there is a chance that it’s not the right goal and that you are shying away from making the changes you really need to make. That said, as you might have picked up, I haven’t been a total stickler for complete abstinence and have allowed times to just not bother about what I’m doing. I think this is hugely important and has really contributed to me being able to last the course. The important thing is that I’ve been structured about the times where I’ve cut loose.

What has been interesting is that because I’ve cut out eating junk during the week I tend to crave it less at the weekends. The same with alcohol. I don’t really think about it if it’s not one of the days I’ve worked towards where I’ll let my hair down a bit. You’ve got to live a little, right!?

I’m fitter than I’ve been in years and this has also helped me sleep better.

Dispite having a lot on at work, I feel far more equipped to deal with the stresses and altogether calmer.

Ultimately, I feel really well equipped to keep this kind of balance well after my 90 days is over. In fact, I’m already thinking about what my next 90-day plan might look like.

I’ll share how I got on at the end of March.

The key factors to consider

1. List the few things that you want to tweak to improve your lifestyle, be sure to be realistic.
2. Cut yourself some slack, build in ‘cheat tokens’.
3. Print out my habit sheet and pin it up in a prominent place marking off your progress each day.
4. Ask someone from your family and friends to help hold you accountable – if you live alone photograph your chart each day and send it to them.
5. Focus on achieving your balance day-by-day or even AM and PM each day.
6. If you slip, consider the days you did do well and choose to channel what you did then into the current day.

Apply this to any habit

Don’t forget, this can apply to absolutely anything that you want to improve. I’ve gone for a more healthy lifestyle with this one but it could easily be focused on other daily practices like writing that new book, not checking e-mail until after 10 am or just taking time out to think and reflect. As the acclaimed psychologist and Buddhist teacher, Tara Brach, once said: “the thing you practice most grows strongest”.