Pantone and Prince - Some collaborations need no words 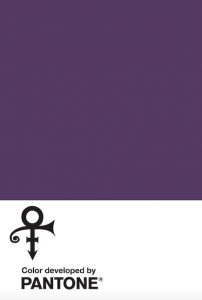 Some people/businesses completely embody what they do.  So much so that they take their association with their product (whatever it may be) to another level. Often, it's a combination of lots of little creative elements.  Elements that have a certain, well,  je ne sais quoi.  When we see them, we know they just fit.  Like Pantone and Prince.

"The Prince Estate, alongside Pantone Color Institute™, the global color authority, announced today the creation of a standardized custom color to represent and honor international icon, Prince. The (naturally) purple hue, represented by his “Love Symbol #2” was inspired by his custom-made Yamaha purple piano, which was originally scheduled to go on tour with the performer before his untimely passing at the age of 57. The color pays tribute to Prince’s indelible mark on music, art, fashion and culture."

And just for the hell of it...

« Element Talks, Warsaw: insights from the founders - turning a sideline into a career - creating a vital European design event
Designer and writer Alan Moore thinks beauty is the key to everything »